Yesterday I stopped by the Sarasota History Center to get an idea of what materials they have to offer.

Jeff LaHurd, the head archivist with whom I have been emailing, is currently on vacation. Another archivist, named Larry, seemed quite busy making up for Mr. LaHurd’s absence.

When I explained to him what we needed he brought out a few folders of photographs and scans of newspapers. During the 1910s, the Sarasota Times was the county’s main paper. The Center set aside scans specifically related to WWI military history. 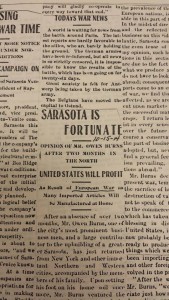 These scans are great but there are only about 30 of them. Most relate to Sarasota’s naval militia. In our previous blog post I mentioned that Sarasota was the smallest city in the country to form a militia. This is true and clearly the best preserved fact about Sarasota’s role in WWI. Most photographs Larry brought out were either of or related to this group of men. 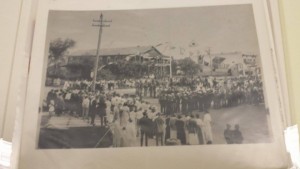 The above photograph is from a gathering at Sarasota’s Five Points Park to celebrate the militia’s send-off to Charleston, South Carolina.

When we go back, we’re hoping to look at full copies of relevant issues of the Sarasota Times; this will give us a better sense of what Sarasota was up to during WWI beyond actual military involvement. We are also still looking forward to inquiring with some residents about possible oral histories.

Overall, day one was a good experience. We are looking forward to digging deeper and finding out more!