Laura and I spent most of the early afternoon going through the Wichita County Archives. We made significant progress regarding our research over the local Spanish Flu epidemic and historical photographs of Call Field. During the 1930’s a secretary constructed a  list of all articles in the local newspapers  that mentioned the Spanish Flu epidemic in Wichita Falls. The listing will help Laura and I determine in detail how the flu affected the local community. Preliminary research showed that the flu caused the Texas Oklahoma boarder to close. We learned yesterday that the courthouse and many public buildings were used to house the excess patients. Particularity funny for Laura and I, was an article that described the protests of the judges who disfavored the idea of their personal chambers being used for the sick. Regarding photographs, I came across eighteen pictures of Call Field during the World War One time frame and an aerial picture of Lake Wichita that showed the famous hotel and boardwalk. The photographs were not marked with specific dates. Unfortunately, someone had glued the pictures onto black construction paper. The glue damaged some of the photographs and made photo replication difficult. Laura arranged an airplane ride for us so we can retake some of the photographs for the purpose of comparison.

The Photo (Below) depicts Call Field men possibly by barracks.

This  photograph (Below) shows a building on Call Field. Laura and I will try to identify which building exactly. 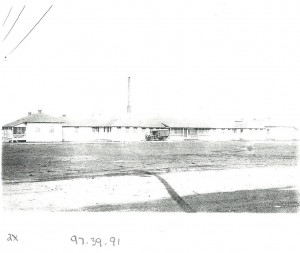 This Aerial photograph (Below)  shows lake Wichita during circa 1914-1917

Members of the machine shop pose in front of a WW1 plane.

Call Field was a training base for the War Department and several deaths occurred due to accidents. (Laura and I will look for an exact number of deaths)

Laura and I plan to retake this photo (Below) in a modern plane. (The second road from the left is Call Field Road today)

Possibly a Jenny returning or taking off from a practice mission at Call Field.

Aerial view of Wichita Falls during World War One (Below).

Class photograph of Squadron B at Call Field Base (Below).

Another crashed Jenny at Call Field (Below).

Men outside building at Call Field (Below – Laura and I will attempt to further identify photo).

School Building at Call Field Base (Below).

Class and School Building at Call Field Airbase (Below – Water-tower in background).

Laura and I believe that this building was the headquarters to the base. (We will look further into our assumption)

This advertisement calls for men to join the War effort by working a support service at Call Field base.

This aerial photograph shows the city of Wichita Falls during World War One (Below).

By far Laura’s favorite, this photograph shows Call Field base.  The first bend in the road is where current day Wasabi Gill is located.