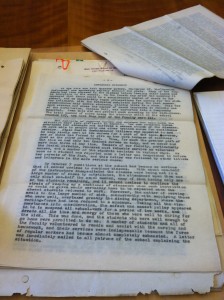 It has been another exciting week for us at UMW! Our group found more items in the Special Collections here at UMW that will be really valuable for our project.  Jack, Julia, and I went back to Special Collections yesterday and spent 2.5 hours looking through President Russell’s papers.  I was hoping to find speeches given by President Russell that are mentioned in the October 1917 Normal School bulletin, but the papers held by UMW seem to deal more with administrative matters like reports to school boards and hiring teachers.  However, we did find other very valuable resources.  It seems that many teachers and employees who sought reappointment in 1918 asked for salaries, and several of them cited the much higher cost of goods and their inability to afford such on their current salaries.  Presumably, these high prices were a direct effect of the war in Europe, and these requests are great examples of not only how World War I affected the economy in general, but also how it affected daily life for people at the State Normal School in Fredericksburg.  We have all also been extremely eager to find documents that address the effect that the influenza epidemic had upon the school’s population.  Julia found a 1918 list of students who had missed a significant number of days, and many of them were listed as having had an “illness.”  Later I found what at the time appeared to be a gold mine of information on the influenza at the State Normal School…until I realized that it was a report for the State Normal School in Harrisonburg (there were four State Normal Schools at this time: Fredericksburg, Harrisonburg, Farmville, and Radford).  (It was very interesting to see, though, that the SNS in Harrisonburg was so afflicted with influenza that it turned one of its residence halls, Jackson Hall, into a temporary hospital because the infirmary was so overcrowded–it could only fit 12 patients.  The school suspended classes for at least two weeks!)  After some more digging and locating a seemingly lost folder of President Russell’s papers, we finally found the Fredericksburg school’s report that mentioned influenza!  Huzzah!  It seems that, comparatively, the SNS in Fredericksburg was not as severely affected by the epidemic as Harrisonburg was–we only closed for 8 days.  Still, a significant portion of the student body and faculty/staff came down with virus.  Unfortunately, Death came to Fredericksburg: Virginia Goolrick, the Head of the History Department, succumbed to the disease and died within a few days of contracting it.  While I was reading the influenza report, Jack was looking at financial records, and found that he could corroborate the dates of the epidemic, and from a monetary standpoint we could see how heavily the virus affected the school.  During the months of the epidemic (fall 1918), the spending of the infirmary shot through the roof, approaching $500!  We had a very productive day in the Special Collections, and marked down what we wanted to go back and digitize for the project.  At this point, I’m not quite sure how we will incorporate everything into the site, but I think at the very least a timeline would be a good feature for the site.  I would definitely like to work in document images as well.

This evening (Thursday, January 29) we continued our archival work, this time venturing to the Masonic Lodge in Historic Downtown Fredericksburg.  We were very excited to visit the Lodge because the Freemasons have a rich and complex history, and we hoped that they would have some good materials for us to look at.  The Masons were delighted that we sought them out for help and are eager to help us with our research–they want a copy of the site/research once everything is completed!  The historian at the Lodge is fairly new (he took on the position in December), and the archivist was not at the Lodge to assist us.  However, as we talked with the historian and the Grand Master, we got some great preliminary information about the Freemasons and their involvement in society, prominent Masons of Fredericksburg at the time.  The Grand Master graciously gave us a copy of their history, written by a Brother, which has a page discussing the Masons’ activities during WWI.  They didn’t have many archival resources for us to look at tonight, but it was more of a preliminary meeting, so that we could meet with them and explain our project in-depth, to give them a better idea of what kind of resources we are searching for.  The Lodge is in the midst of cataloging and digitizing its archives, which will be beneficial to our project.  Once the secretary and archivist are apprised of our project, I am sure they will have some interesting resources for us to look at, like photographs and meeting minutes.  I’m very excited to see what they can find for us! 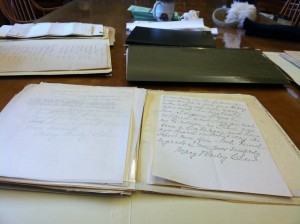